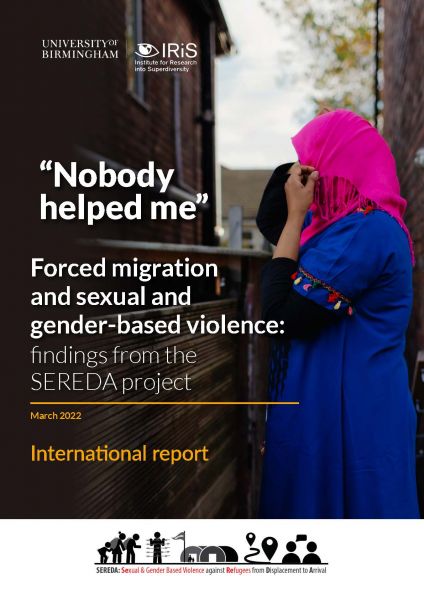 "Nobody helped me": Forced migration and sexual and gender-based violence

The session will commence at 6.00pm AEST (9am BST)

We are pleased to invite you to an online launch of the SEREDA (Sexual and gender based violence in the refugee crisis: from displacement to arrival) international report. It sets out the findings from a major multi-country research study looking at the experiences of forced migrant survivors of sexual and gender-based violence from displacement to arrival in refuge.

Over the past four years, the SEREDA project has interviewed over 300 survivors and organisations to examine the nature and incidence of GBV experiences across forced migrant journeys and explored the ways in which survivors could be better protected and supported in both transit and settlement. The project is led by the University of Birmingham, in collaboration with the Universities of Uppsala, Bilkent and Melbourne, the Women’s Refugee Commission, Doctors of the World (UK), Victorian Foundation for the Survivors of Torture (Australia) and the Association for Solidarity with Asylum Seekers and Migrants (Turkey).

SEREDA findings point to complex experiences of sexual and gender-based violence spanning along a continuum of violence from pre-displacement, through conflict and transit, to refuge. Displaced survivors on the move and/or who have arrived in countries of refuge are unable to access appropriate services and support including post-rape prophylaxis and psychological support.  In addition immigration, asylum and resettlement systems in all countries place survivors at risk of further abuse with some processes found to re-traumatise survivors.

At the launch, the multi-country SEREDA Team will hold a panel discussion presenting cross-country and country-specific findings from the UK, Australia, Sweden, Turkey and Tunisia. The panellists and discussants will also identify next steps for supporting GBV survivors on the move and in countries of refuge, including in the context of recent Ukraine crisis and large-scale feminised displacement. The session will be moderated by Dale Buscher, Vice President, Programmes, Women’s Refugee Commission. Panellists include: