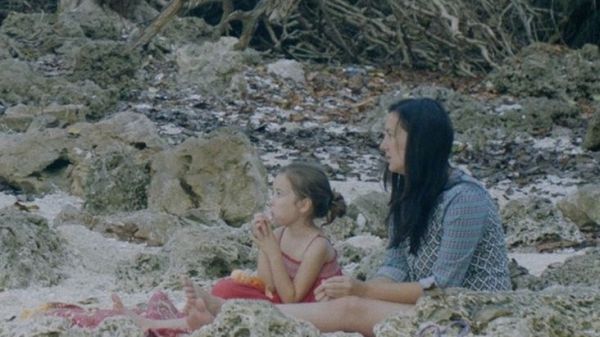 The Melbourne Social Equity Institute is pleased to be partnering with Screening Ideas to present the  Migration and Social Justice film series.

Join us on Tuesday 26 April for a screening and discussion of Island of Hungry Ghosts.

The screening will be followed by a conversation with Dr Claire Loughnan.

Located off the coast of Indonesia, the Australian territory of Christmas Island is inhabited by migratory crabs travelling in their millions from the jungle towards the ocean, in a movement that has been provoked by the full moon for hundreds of thousands of years. Poh Lin Lee is a “trauma therapist” who lives with her family in this seemingly idyllic paradise. Every day, she talks with the asylum seekers held indefinitely in a high-security detention centre hidden in the island’s core, attempting to support them in a situation that is as unbearable as its outcome is uncertain. As Poh Lin and her family explore the islands beautiful yet threatening landscape, the local islanders carry out their “hungry ghost” rituals for the spirits of those who died on the island without a burial. They make offerings to appease the lost souls who are said to be wandering the jungles at night looking for home. In the intimacy of her therapy sessions, as Poh Lin listens to the growing sense of despair of the people she counsels, she begins to feel the creeping dystopia reverberate through her own life.

Registration is free but capacity is strictly limited, so book now to avoid disappointment.

Dr Claire Loughnan is is a Lecturer in Criminology in the School of Social and Political Sciences, University of Melbourne.

Her research examines the modes, practices and effects of living and working in sites of confinement and on the carceral expansion accompanying border control practices. She has published in a number of journals and media outlets, including in Globalizations, UNSW Law Journal, Asia Pacific Journal of Migration, and Law Text Culture. She is a research partner with the EU-funded CONREP project.

Her first book on the institutional effects of immigration detention is under contract with Routledge (forthcoming 2022). Claire has also worked with artist Hoda Afshar on a short film produced by Afshar, entitled Agonistes, on those speaking out about institutional violence, including in offshore processing centres in Manus and Nauru.